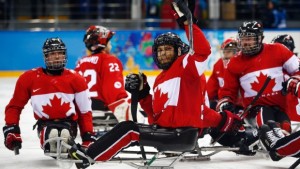 The Fun of Watching
Sled hockey is a fast paced, energizing display of athleticism. As a spectator you are out of your seat as much as you are in it. The speed of whizzing by with such a low center of gravity keeps these players constantly in excited play.

Rooting for the Underdog
Come on, these guys are not coming out of the box presenting themselves as underdogs, but it’s human nature to want to cheer on the “disadvantaged”. Believe me, when you watch a game in progress it’s easy to forget that their legs are not in play. It doesn’t take more than a single period to realize that there are really no underdogs on the ice.

Simple Appreciation
Anytime an athlete is giving his best, the crowd can sense it. There is an appreciation built in to the fact that the players themselves are thrilled to be playing and the fans recognize this with reciprocal appreciation. It’s a mutual understanding, spoken in cheers and support, along with good entertainment that is exchanged between players and fans.

Not Your Typical Players
While a lot of the players have come to the sport via the battlefield, some have joined the ranks of the elite as kids. Thirteen year old Maddy Eberhard recently became the youngest member of the National Women’s Sled Hockey Team. Maddy was born with Larsen Syndrome, which leaves all of her joints from the waist down subject to dislocation. It’s impossible for her to put weight on her lower extremities for any length of time or have the move-ability required for stand-up hockey. Maddy comes from a hockey lovin’ family and after watching her little brother Michael play, she simply knew she would not be able to sit on the sidelines as an observer. 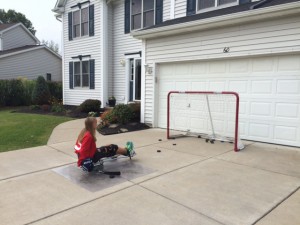 Maddy was first fitted for a hockey sled at the young age of eight. She cut her teeth playing on the Buffalo Sabre’s Select Sled Hockey Team with men twice her age. Her Mom recalls wondering how she was going to fair being up against the brawn of guys so much older, but that fear was soon abated when she witnessed Maddy shoulder butt another player sending him right off his sled. Maddy feels honored to be a part of the National Women’s Sled Hockey Team since she has always looked up to them as role models. She travels all over the country inspiring athletes of every age and knows that now she is a role model, too.

Keep an eye out for Sled Hockey functions in your area. Events are becoming very popular, and with a growing fan base it’s likely you will find one not far from home. Give yourself a treat and learn more about this unparalleled sport, and the first chance you get, attend a live game.